Trust the bride to choose a groom from a family who live in the most perfect New England town ever. Essex, on the deep estuary of the Connecticut River, is picturesque most of the year, but comes into its own during the snow-covered days of winter.

With cold weather taking hold a few weeks earlier than normal, the Connecticut River towns are knee-deep in perfect snow as we make our way to Centerbrook to decorate the wedding hall. Helen and Mike are getting married on Friday 13 December in a beautiful old meetinghouse, originally built in 1722 and recently renovated by two private benefactors.

In the run-up to Christmas, the townspeople of Essex and its near neighbours take pride in the decoration of their homes. Venerable weatherboard houses of respectable dimensions light up at dusk with fairy-lit door wreaths, identical candles in every window, perfectly measured spruce garlands on picket fences. There is not a cheesy inflatable Santa or electric penguin in sight.

There is no hint of grey slush here: all is pure white. The gazebo on the village green is decorated with garlands and a Christmas tree, all festooned with white fairy lights sparkling through the darkness of a December afternoon. One family has carved out a skating rink on the village pond. I stroll down the main drag as a few flurries of snow fall, and can’t decide which home is the most flawlessly decorated. I am simply enthralled by the Christmassiness of it all.

We meet up with Mike’s two moms (Real Mom Peggy and Step-Mom Sue) at Peggy’s sprawling New England home on the water’s edge in Essex itself. Like the rest of the village, the house and garden are picture-perfect under at least a foot of snow. The charming but often out of place American Christmas decorations I have seen in many European houses seem perfect in this home: a huge tree in the living room is the centrepiece and every wall and table surface has a wreath or a ribbon attached. The kitchen is well stocked with every sandwich filling known to man (handy for those of us who are feeling a little worse for wear after the school reunion of the night before), and Peggy does a good line in chilled non-alcoholic drinks to help with rehydration.  Needless to say, every plate, cup and glass is Christmas-themed without being vulgar. The red-and-green “Christmas in Essex” napkins seem appealing in this house, whilst I know at home they would just look ironic. I still want some, and Sue quietly tells me the name of the shop in town where I can stock up. 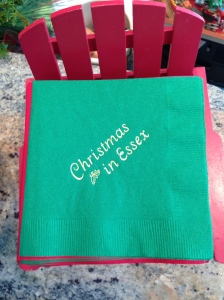 Down at the Meeting House, we join forces with the (thin-lipped and grim-faced) wedding planner and her (much friendlier) associate to deck the halls for the wedding feast. The reception room looks bare with just a few wooden trestle tables strewn about, but a few hours’ hard work from willing workers transform the space into a green, silver and white spectacle replete with Christmas baubles, acres of tulle, fancy folded linen napkins, polished silverware and more Christmas cheer than you can shake a stick at.

The bride takes a few minutes to regroup in the picture-perfect chapel area while the rest of us try to even out the number of votive candles per table of twelve. All must be perfect for the big day.

A last-minute visit to Ikea (more votive candles are required) and before long we are back at home base, avoiding the mere mention of alcohol and inhaling vast quantities of vegetables from the Chinese takeaway in the vain hope that our culinary choices will negate the over-indulgence of the night before. It’s going to be a big couple of days and we need our wits about us.

In June 1987, a seriously dodgy-looking crowd stood together in the sunken gardens behind Earlsfort Terrace and the National Concert Hall, to have our last ever photo together.

Recognise anybody: perhaps even yourself?

END_OF_DOCUMENT_TOKEN_TO_BE_REPLACED

Ladies and gentlemen, may I present the maireaddoyle.com Woman of the Year – my mother, Margaret Doyle.

Mum has had a long and busy life. Born in Palmerstown (county Dublin as she will always remind us), she lived her early life with her mother and three sisters in a white-washed cottage. Her father died when she was a baby, and my grandmother (Mama) supported her family by working as a seamstress in the Stewarts Hospital nearby.

With a seamstress mother, my mum and the other Donoghue girls were always very well dressed. Mum would boast that she would only need to show Mama a picture of a frock she wanted, and it would be reproduced perfectly.

Mum was also a great dancer, and she went to dances every week with her friends and sisters, often cycling as far away as Leixlip or further to go to the best places. It was at a dance she met my dad (a previous Man of the Year of course!) and they married in 1953. And yes, Mama made the wedding gown.

It was a happy marriage although they both readily admit there were some hard times too. But the annual dinner dance was always something to look forward to, with the men in their best suits and the women dressed in Ginger Rogers-style frocks (my parents are second couple from the right).

Whilst raising four children, she also worked in the local school from when I was about a year old to December 2005 believe it or not – retiring finally, and with a huge party, at age 79. Her sister, my auntie Molly, also worked with her there, and they were very close as a result (this is Mum and Molly at a family wedding in 1973 – great outfits!).Up until her retirement she regularly cycled to the school across the fields at the back of our house, which is why she has better legs than any of her daughters!

My mother has always been a stylish woman, although like myself she doesn’t often look well in a hat (or welding helmet as on this occasion).

However this has not stopped her flaunting new creations whenever possible (this is her looking suitably edgy in Camden Market).

But no matter what she wore, my Dad always thought she was gorgeous.

And to confirm their devotion to one another, a huge party was held in celebration of their 50th wedding anniversary in August 2003.

We all inherited our love of food from my mother – a woman who has quoted “reading menus” as one of her pastimes (seen here checking out local cuisine in Cornwall).

But this is the only documented occurence of her buying a drink in a pub.

It was a difficult year or so for my mum: we lost her sister Molly in September 2004, then her best friend and longtime neighbour Marie Kenny in April 2005, just four weeks before my dad died. But, as somebody remarked around that time, she is one classy lady, and she went through those hard weeks and months with determination and dignity.

She has always been welcoming to her prodigal daughters (me and Mena) when we visit, and no matter how far away she is, she is always on the end of the phone if we want to talk to her.

But she relies very much on Annette, who lives in Dublin, and has spent a lot of time with her since Dad died.

However we daughters know we can never hold a candle to her beloved Son Boy – the only son of an Irish woman is hard to beat!

The family visited me in London before we left, and she showed her adventurous side by visiting (and cleaning her plate in) a Chinatown restaurant with her extended family. And she walked rings around her children and grandchildren too!

We are all really proud to have her as a mother, a grandmother, and a mother-in-law. I won’t tell her age as she would be mad, but I think all would agree she looks great still. And don’t I look just like her?!!!

Ben Doyle Senior was born in Dublin on 5 October 1925. He married my mum in 1953, and they celebrated their 50th wedding anniversary last year.

When I was a kid, Dad was great. He bought me sweets every pay day, and because I lived at home all the way through university I was still getting those sweets until age 20!

We had a trip out somewhere almost every Sunday. In the winter we would go somewhere even if the weather was bad – a ramble through the Furry Glen in the Phoenix Park, or a walk along the pier in Dun Laoghaire, or a drive out to Howth Head. In the spring he would start taking us further afield as the weather got better – Easter was usually the first big expedition, when he would take us down to Avondale or Glendalough.

Even in recent years we have done this when I have come home for the weekend, often with the youngest grandchildren in tow.

Summers were spent on one or other of the Dublin and Wicklow beaches – Dollymount where you could drive right onto the beach and sit surrounded by windcheaters trying not to feeeze to death, or maybe out to Bray to sit in the gardens by the stony beach and try in vain to make tea on our old Primus stove. Autumn was usually off into the mountains – driving over the Sally Gap on the way to Glendalough or Glenasmole, with Dad naming every mountain, forest and lake for us. He passed on his love of geography to most of his children, and we all love poring over maps still.

In summer we would almost always travel across the country to Galway, for two weeks in a caravan by the sea. It always took all day to get there, two adults and four children plus lots of luggage in a standard saloon car – I usually got to sit on a folding stool crammed between the others’ legs!

As I grew up and studied engineering he was, I think, fascinated to see a daughter of his moving into a career he knew something of – he had spent his working life as a structural steel welder. I even visited his work and met his manager one day as I was considering my university options.

When I started work he was really interested in what I did, and managed to visit most of the places I worked in. He nearly blagged himself a job once by impressing my senior engineer with his welding skills!

I once asked him what the secret of his long marriage was. After the usual joke answer, he settled in and gave me his real answer. The core of a successful marriage, he told me, was based on honesty, trust and shared goals. And never arguing over money.

All my life he has been there, a quiet but solid support, even from afar. He calls me up and tells me bad jokes on the phone, always draws a pint of Guinness in biro on every note and card he writes, and until recently insisted that it was his job alone to pick me up from the airport. His best mate is his only grandson (and clone), 7-year-old Connor.

Now he is a bit frailer after a year of ill health, but he is still there at the head of the household. He is a role model to me – a dedicated husband, a caring father and a doting grandfather.  He is my Man of the Year.

Ladies and gentlemen – I give you Orlando.

Man of Action – Orlando takes on the world

Orlando and his god-daughter Lalah in Ireland

Orlando and new god-son Kamron – or “Young Padawan” as the child is now called!

Orlando’s homepage is definitely worth a read – follow this link!