It took five hours, an increase in elevation of 2,200 metres and a decrease in temperature of more than 20˚C, to make the journey into the mountains to the town of San Cristobal de las Casas. This was a much more interesting journey than the relatively uneventful, sanitised motorway trips we’d undertaken so far.

The road wound its way slowly up into the highlands, through small roadside villages and two or three larger towns. As the journey progressed the houses seemed to become much more modest and the living much more agricultural. Most houses were growing some small crops on the land around and between dwellings: cabbages, onions, tomatoes, papayas, bananas, limes and of course the ubiquitous corn.

The women often wore traditional dress of an ornately-embroidered short-sleeved satin top, a mid-calf-length (usually black) woollen skirt folded into pleats at the front and held in place with a wide fabric belt tied at the side. More and more men wore cowboy hats. Every village seemed to have a modern basketball court, where the local young men had congregated to play despite the recent heavy rain. Many of the schools proudly announced that they were bi-lingual, Spanish not being the first language of this region of Mexico.

The bus careered around sharp bends on a narrow road which often clung to the side of a sheer descent. More than once I had to divert my eyes as my stomach lurched when I could see nothing but fresh air and a vertical drop out my window.

The light faded as we approached San Cristobal though a heavy rainstorm. I could feel through the window of the bus that it was very chilly outside. I assessed my clothing and footwear: head-to-toe white linen and a pair of flipflops were not going to insulate me from the chill of a town at twice the elevation of Ben Nevis, at eight in the evening. I shivered in anticipation.

Thankfully the rain had stopped by the time we disembarked, and a twenty minute walk through town carrying a sixteen-kilo backpack kept me warm enough initially. We had no hotel room booked, and for once the Lonely Planet let us down with a badly-researched map. The town was crawling with cars, buses and people: with the wet ground, the chill in the air and the shops all lit up in the twilight I had a real sense of Christmas shopping in Dublin city late on a December Saturday afternoon. What could possibly be going on, on a random Thursday evening in June?

The receptionist in the Hotel LiquidAmbar explained all as we checked into a tiny but immaculately-clean room overlooking the reception area: it was the feast of Corpus Christi.

We dumped our bags, threw on as many extra layers as we could find, and headed out into the evening’s festivities. We were a block away from the cathedral square, where the façade of the cathedral was lit up spectacularly. Hawkers from the neighbouring villages kept stalls or wandered the crowd selling multi-coloured shawls, embroidered belts, woven bracelets and other textiles. 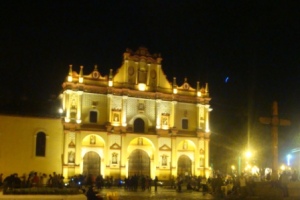 Along one side of the leafy Plaza de 31 Marzo, an arched walkway was ablaze with lights and crowded with people: we squeezed in through the throng, to find the walkway lined with sweet sellers, their stalls piled high with every kind of cake imaginable. Honey-drenched offerings looked very like Indian sweets; tray after tray of perfectly-formed fruit miniatures made from marzipan tempted the passers-by. Orlando spoke to one old lady – most of the stalls were run by several generations of women from the same family it seemed – and chose three cakes to try later on.

We strolled down Avenida Hidalgo, past terracotta-roofed restaurants and cafés with people sitting outside, clearly shivering with the cold and inadequately dressed for the altitude. It reminded me of Melbourne in winter, with the whole population in denial about the good sense of sitting outside in mid-winter.

Back north of the Plaza Grande, Av. Hidalgo turned into Av. 20 Noviembre. Still pedestrianised and touristy, its side streets gave the occasional tantalising glimpse of Iglesia San Cristobal on a hill outside town. We stopped at a taco place – well, it was either more tacos or the more international choices of sushi or pizza – and devoured five tacos de pastor and five of chorizo and cheese. We then declared our love affair with tacos over forever: you can, it seems, have too much of a good thing. The scalding hot tea was great, though, on such a chilly night.

Back in our room we warded off the cold in bed with two thin blankets which were barely sufficient to warm us up again. Eventually I hid completely under the bedclothes and snuggled up to Orlando in yet another (barely) double bed, before sleep finally came. Tomorrow night, I promised myself, I would steal more blankets from the empty room next door.